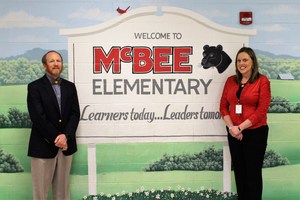 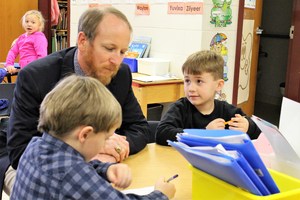 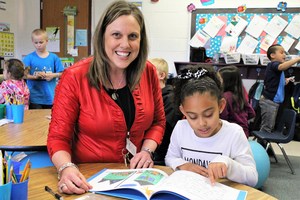 Dr. David Nutt, principal of McBee Elementary, has announced he will be retiring for medical reasons later this week. Dr. Nutt has served Chesterfield County School District with distinction for 15 years.
He was first appointed principal of Pageland Elementary in July of 2003 and was later appointed principal of McBee Elementary in July 2005. During his tenure at McBee Elementary, the school has experienced significant academic achievement progress with students meeting or exceeding state averages in many areas based on state standardized testing. McBee Elementary has been honored by the South Carolina State Department of Education through the Palmetto Gold and Silver Awards system on numerous occasions under Dr. Nutt’s leadership. In addition, the students of McBee Elementary have excelled in many co-curricular areas including the performing arts and the Junior Beta Club activities. During Dr. Nutt’s tenure as principal, the school has fostered business and community relationships that have resulted in literally thousands of dollars of support for programs and activities at the school. Under Dr. Nutt’s leadership, he strived to develop students not only academically but as citizens of their communities. Students participated in the McBee Soup Kitchen, sang at nursing homes, raised money through Pennies for Patients and Relay for Life, gave money to United Way, and raised funds for other philanthropic organizations.According to Dr. Nutt, “I consider myself fortunate to have had the opportunity to serve at two wonderful schools in our school district. While I will miss the day to day interactions with teachers, staff, students, and parents, I will always cherish the memories made with those amazing groups of people. The teachers and staff I have worked with are second to none. The parents have been incredibly supportive. Our students are amazing young people who have taught me much more about life than I could ever teach them. Chesterfield County School District is a special place. I look forward to following your future success.”Until a permanent leader is appointed, Mrs. Angela Demby, currently serving as Assistant Principal of McBee Elementary, will serve as interim principal. Mrs. Demby, a native of Chesterfield County, has served in Chesterfield County School District for over 26 years, first as a teacher, then guidance counselor and later assistant principal. Before coming to McBee Elementary as assistant principal this school year, she previously served as Curriculum Coordinator/Assistant Principal at Edwards Elementary for five years and then Assistant Principal at Cheraw Intermediate for two years. "I am excited about being named interim principal at McBee Elementary. I have enjoyed working with the students, parents, faculty/staff, and the entire community. I am honored to have had the opportunity to work with Dr. Nutt. He is an amazing person, and an outstanding leader. I will do my best to continue to make McBee Elementary a school we can all be proud of," said Mrs. Demby.Mrs. Demby received her undergraduate degree from Winthrop University in 1991 and her graduate degrees from the University of South Carolina. Mrs. Demby is certified in Early Childhood Education, Elementary Education, Elementary Guidance, and Elementary Principal.“Dr. Nutt has served the students of Chesterfield County in an exemplary and selfless manner for many years. We thank him for his dedication and example that he has set for the students and staff of McBee Elementary. Our district has confidence that Mrs. Demby will continue this positive course for the students of McBee Elementary,” said Superintendent Dr. Harrison Goodwin.